A Note About Survival Pilot

As I am sure you are well-aware of by now, I have this music-recording thing I have been doing -- the latest incarnation of which is currently called Survival Pilot.  I am currently recording an album, newly entitled Goodbye Melancholia, and am releasing each song upon completion -- instead of the traditional route of releasing everything at once.  This gives people a chance to be in on the creative process (and it will keep me on my toes).

Anyways, the results of the recording I have been doing are turning out rather well (if I do say-so myself).  The latest (fourth) single to be released is called "Goodbye", and I encourage you to go to My Soundclick Page and check it out.  After a few days to get the vocals right, I have released it -- and am very happy with the results.

As I am poor and being forced to be creative on the fly, I have to use what I have available.  This is why I am using for my album art this image -- 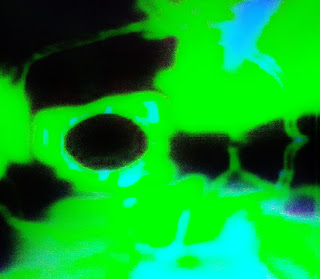 -- which is a cell phone picture of the visualizations on Windows Media Player (and which I edited with the very basic photo-editing software I have on my computer).

All of Survival Pilot's music is also available for free download -- if you are interested.
Posted by Gabe Gott at 7:32 PM