Sam, a college freshman, is taking a shower, getting ready for class, when he finds out about the attacks on the World Trade Center on September 11, 2001. 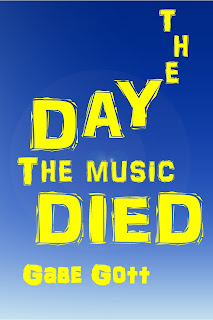 If you are into music like I am, and you enjoy or even need it while you read, I have compiled a playlist in the spirit of Escapes. I am not sure how long it is, but it is definitely several hours worth of songs and should last for most of the novel, if you read at the right pace. Of course, you don't have listen to the playlist to read it; then again, you don't need the book to listen to the playlist. However you like it, ENJOY!

11. "Nice Guys Finish Last" by Green Day
12. "All Apologies" by Herbie Hancock
13. "The Great Gig in the Sky" by Pink Floyd
14. "Rusty Cage" by Soundgarden
15. "Louie Louie" by the Kingsmen
16. "The Bear Song" by Green Jelly
17. "Knights of the Round Table" by Monty Python
18. "Government Flu" by the Dead Kennedys
19. "Super Charger Heaven" by White Zombie
20. "Astonishing Panorama of the Endtimes" by Marilyn Manson