A Call to Literary Fiction Authors: Let's Be Indie Together

One thing I have noticed since officially declaring myself an indie author and going it alone by self-publishing is that many, if not most, of my fellow DIYers write genre fiction: sci-fi/fantasy, contemporary romance, and every sort of cross-genre you can imagine are all well-represented.

However, it seems like there is a lack of self-published literary fiction. Maybe I am just not aware of it and I just need to do my due-diligence, but I am especially noticing this on social media, particularly on Twitter, and also among book bloggers and review writers.

I have a theory about why this is the case. Last summer for my Digital Humanities class, I wrote my final paper on self-publishing, and what I found then is that people who tend to read literary fiction tend to support fiction published more traditionally as it has to go through a series of gatekeepers before it reaches the public, which helps ensure a higher quality of work.

Literary fiction is supposed to go beyond merely being well-edited and telling a good story, but the conventions are less clearly defined. The books are supposed to be more intellectually stimulating and have a more finely tuned sense of style. It is acceptable for the prose to call attention to itself, and experimentation is generally more welcome. In fact, it is often encouraged.

Which is why it is easier to self-publish and sell works of genre fiction. The only gatekeepers are the book bloggers and review writers, who are more focused on readability and entertainment value than on literary merit. What matters is whether the characters are interesting, the plot is evident, and the story is entertaining. It is your goal to conform to the conventions of the genre and appeal to its fans.

That doesn't mean there is no room for indie authors to write literary fiction. In fact, I would like to think that, as an indie author, you have more freedom to experiment and push boundaries than you would at a traditional publishing house. The problem is, there doesn't really seem to be anyone telling our audience that it is safe and acceptable to read our work.

Those of us who want to self-publish literary fiction need to band together and start reviewing each other's work, and be our own gatekeepers. We do have an audience, and our audience needs to trust what they are purchasing, which means that we need to gain credibility somehow. By working together and using the knowledge that we have developed through our studies, we can show people who would potentially read our work that it is worth their time and money.

That means going beyond mere reviews and actually writing in-depth criticisms, building theory around our ideas, and arguing in favor of the direction(s) we are taking. We don't need traditional gatekeepers who represent their own corporate interests anymore than authors of genre fiction do. We can create our own scene, and draw people to it.

Which is what indie authors of genre fiction are doing, and by taking their model and making it work for us, we can be successful.
Posted by Gabe Gott at 12:33 PM No comments:

How I Know That My Book is Finished

At risk of developing a Whitman-like obsession for perfection, I am finally putting it to rest. It has been a long arduous process, but I am ready.

As an indie author, and a steadfast one at that, I have no one telling me when it's ready, and it's not like baking something from a recipe. It takes trial and error, careful, honest criticism, and patience. Well, maybe baking is like that too.

When it comes down to it, though, there are a few particular reasons why I know I am finished, which I would like to share with you, so that maybe your process isn't quite so long and arduous--or at least you'll know that you aren't alone.

Perhaps I have taken too much time in doing so, but because I did not know what I was doing when I started, which I am sure is the case with most people when they sit down to write that first novel, I wasn't sure on the direction I was going to go with it, and it took shape how it took shape.

After I finished the first draft, I went back and immediately reconsidered everything. And again. I had some people read it and give me feedback, and that shaped it as well. Maybe I did not take every piece of advice, but I at least considered it all.

Then I went back to school and studied literature and fiction writing, and that shaped it a great deal. I had more people read it, including an editor at one of the big publishing companies (who I went to college with), and I changed it again after some careful consideration.

Grad school came around, and the book continued to be molded based on my increased knowledge and experience. Midway through my second year, I decided to self-publish it. Afterwards, I got some less-than-pleasing feedback, which caused me to reconsider every choice that I made.

I went back and changed it a great deal to fix the perceived shortcomings, and then I published the second edition, which is considerable different from the first--but it didn't take long for me to realize that I still wasn't happy with it. I didn't recognize what it had become, and I realized I had let too many outside people shape it.

The Path Has Reached It's End

After taking some time off from it and letting the entire experience sink in and work its way around my brain, I decided to give it one last go.

I decided upon a very clear direction, and set to work. I went back to the first edition, which more resembled what I had originally intended, and reshaped it based on my new perspective.

Carefully and thoroughly, I made changes. Then I went through it again and ruthlessly edited it, and again, and again. I changed the way that I edit so that I could be more consistent and thorough. Then I proofread it until I was satisfied with every aspect of it.

In my mind, I have taken it as far in that direction as it can logically go, and if I change it again, it will take away from that. I have very consciously made my decisions, and while they all might not sit well with the status quo, I am satisfied, and believe I have made it into what it should be--what I intended it to be from the beginning.

Just because I have focused on this one project for so long, it doesn't mean that I haven't had other ideas. In fact, I have started four other books.

If I continue to go back and make changes to this one project, I will never get to those others, which are very different in a number of ways. As I said, when I started the first one, I didn't know what I was doing. That is not the case with any of these others. They were all started later, and they all have a much clearer direction than the first one ever did.

I am severely limiting myself if I only work on this one project for the rest of my life, and I believe that the best is yet to come. If Fitzgerald had spent his whole career on This Side of Paradise, he never would have written The Great Gatsby.

Every time I go back to that first one, I am delaying the completion of all the others. I can take what I have learned and incorporate it into the next project.

Perfection is an entirely subjective measure when it comes to novel-writing. Tastes change over time, and what is popular today might not (and probably won't be) popular two years from now.

Not to mention, not everyone is ever going to like your book. Some people are going to hate it, and no matter how great you or others consider it to be, it doesn't matter. Just look at the Amazon or Goodreads reviews of canonical writers like Shakespeare. If ol' Billy Shakes gets bad reviews, so will you.

That is a hard lesson to learn. You just have to take the negative for what it is and be confident that someone out there wants to read your book as it is now.

Once you are finished, and it has turned out how you intended, the next step is selling it. Finding that audience, getting it in front them, and influencing them to purchase it. Unless you are extremely lucky, books don't sell themselves. You have to make the effort to sell them. If you want to be successful, learn marketing and advertising. If someone can get rich off of selling pet rocks, then anything is possible if you set your mind to it and work towards it.

I am confident that I can find an audience for my book, and that I can accept the fact that, as Taylor Swift says, "haters gonna hate hate hate hate hate." It's going to take time and effort, and thick skin, but that doesn't mean that I need to stop and go back to the beginning. It means that I just need to keep pushing forward.
Posted by Gabe Gott at 10:50 AM No comments:

Just a small delay in the completion of Escapes. It will be out on June 15, 2015. That shouldn't change, but stayed tuned, just in case. 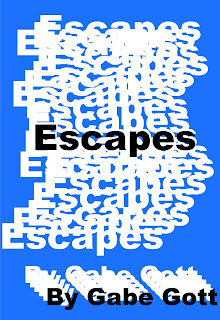