The problem with protesting or "rioting," as it often gets labeled, is that no matter how just the cause, it almost always leads to violence, and fascists aren't known for fighting fairly. Just ask anyone who witnessed the events at Kent State or Jackson State in May 1970. My fear is that something similar, or worse, is going to happen next. I fully support the cause of the demonstrators, and I mean the real activists, not the right wing agitators.

Before I continue, I think it's important for me to say, no matter how obvious you think it might be: No one deserves to die like George Floyd, Breonna Taylor, or any of the countless others before them. No one. They were murdered.

That's why there is a lot of anger and resentment from their communities, and the countless others, and why it is completely justified. It's not like these men and women that keep getting shot, beaten, strangled, or whatever, by state-sanctioned "officers of the peace" want to be martyrs. I am sure they would have much preferred to keep on living their lives, but unfortunately, they did not get that choice.

The purpose of the police, and the military, and indeed the entire government at all levels, is to act on behalf of the people and protect the social contract, which guarantees the rights of all citizens, not just a select few billionaires. There shouldn't be varying levels of rights for you depending on who you are, how much money you have, or what you look like, but that is the way it seems to work.
It is my understanding that the Defund the Police movement intends to do just that, not to eliminate the police, but to transform the forces in all communities to perform this intended function of acting on behalf of the people and not to act as a standing army as they seem to be becoming with all of the military weapons and body armor and whatnot, to help the good officers weed out the bad ones, and to make sure the bad ones are held responsible for the bad things that they do. Police should be representative of the communities where they serve and should be protecting them and not putting them in more danger, but unfortunately, for some people, that is exactly what police do, and you have to wonder, if it's not their race, then what is it that connects them?

Further, how many more people have to die before real reform will actually happen? Everyone deserves the same rights, which according to the Declaration of Independence, are inalienable. Of course, at the time that was written, many of the founding fathers only included white, landowning men in that statement, but, you know... That's a detail that even the most well-intentioned among us often overlook.

When I see people complaining about the "rioters" especially poor white people (who have been victimized plenty throughout the centuries--just ask the Irish) I know, for most of them, it's because they are missing the point. Not that ignorance is really excusable anymore due to technology, but... A lot of the willfulness of their ignorance stems from the propaganda they have been force-fed for decades to distrust academic institutions, the humanities, and the news media. In order to truly change those who are able to be changed, we first need to unplug them all from the umbilical of this propaganda machine and dismantle it once piece at a time.

The people complaining about the protesters who aren't missing the point, those folks constantly speaking in dog whistles and coded language, who seek to keep stirring the pot and distracting everyone from what's really going on, those are the people who need to be revealed to the public, who need to be prevented from causing the harm they are wreaking on our society.

At least (at least among my peers and the people I'm connected with through social media) most agree that the killings of George Floyd and Breonna Taylor were wrong, so that gives me a little hope. Not much, but a little. That said, there is still a long, long way to go.

The problem with that is it might be too late.
Posted by Gabe Gott at 2:12 PM No comments:

Or, What I Do in My Basement is Wholesome so Fuck You

[Sorry, I don't Mean to Sound So Defensive, I Just have to Keep My Online Persona Consistent As to Not Draw Any Attention to the Fact that I Might be a Dynamic Human Being Capable of More than One Trance-like Emotional State] 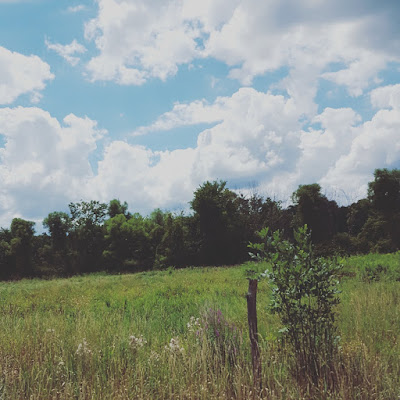 There's not many better feelings than driving through the countryside on a sunny day, the brightness carefully suppressed from damaging my eyeballs by my Bob Dylan shades, stretches of trees and farmland flashing past on either side, the windows down, a cool almost moist breeze wrapping it's invisible scarves around me and through the cabin of my car, the sun-bleached asphalt unwinding ahead, with music blasting, me singing out at the top of my lungs--

That's one thing I need to do more, but I have nowhere really to go right now. Of course, I would also have to wait for a nice day. That might be a while, at the rate things are going. I mean, I could drive somewhere just to drive--just to leave the house. Get some fresh air.

There is something to be said about driving around on a gloomy day, too: the window cracked, the fresh drops filling my nostrils with their perfume, listening to the Allman Brothers Idlewild South, the slow slosh of the windshield wipers--back in my twenties I would have had a cigarette, the menthol and tobacco wafting with the rain scent creating a sort of intoxicating potpourri.

This weekend has been more like winter than early May, though, and the only thing fun about driving around in winter is driving at night when the snow is blowing, an X-Wing Pilot flying through hyperspace. "This is Red Leader..." As fun as that is, I am not in the mood.

That's Ohio for you, I suppose. Instead of going on a drive, I have barely left the basement. I have spent a long, seemingly endless amount of time down here, re-arranging my shit--getting my organ bench from the garage, sitting my trunk on it and using the combined structure as a table for my synth and my drum machine, and moving my guitars and drum set around to make it all work. This might actually be my favorite basement setup yet. 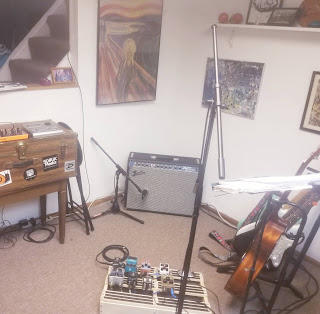 This space really works really well as a one-man recording operation (and maybe eventually for live-streaming) but it would only be conducive for a full band if it was like a three piece or four piece, max. Four piece might be stretching it, actually. It would definitely be loud and sweaty... Gross. No, I like the idea of doing a one-man band thing, and I like the idea of being a member of a band, but I wouldn't want that band to actually practice here after we gain more members than my brother and me.

We'll see. We really just even need to actually practice more than once or twice to really be considered a thing. I mean, what else have we got going on?

One thing as a musician that I strive to do, really as an artist, in general--because actually this is also kind of the essence of writing fiction--is take my audience to a specific time and place, and fusing these two disparate media together can help make it even more real, more present... And it has been a dream of mine to do for a long time.

I did kind of a proto-version of it with my novel, Escapes, creating a playlist on Spotify that covers music mentioned in or relating to the story. I am listening to that now, actually. It has a weird mixture of jazz, rock, punk, alternative, metal, and pop, as the story covers a lot of territory musically.

With my upcoming short story collection, Asshole Years, I would like to take that idea of combining music and reading to the next level. After I finish editing and proofreading it, the collection will go into production and I can set a firm release date. While that's taking place, I will start working on an accompanying soundtrack--think Pink Floyd but with a noise punk-alternative-new wave edge.

That's really why I got an analog synth. To add to the space rock-psychedelic ambient flavor of my sound. When I used to perform regularly, I would often get compared to Syd Barrett or Pink Floyd. I don't know if that's actually true, but that's what audience members (and totally different people) have told me after performances, on more than one occasion. Anyways, I plan to start composing the new, mostly instrumental songs for the collection soon, and I will include a download code or something with the book, and really lean into that.

And actually, to tie it all together with a neat little bow, driving around seemingly aimlessly is one theme that does carry through the collection, somewhat. I guess it's good that I'm in that frame of mind. Maybe I need to go on a road trip for the inspiration.

If the goddamn weather ever cooperates long enough.
Posted by Gabe Gott at 3:00 PM No comments: