My wife has already been up for two hours when I get up up at 9:47 and walk down the stairs. She is watching HGTV, which has become our latest addiction, as we dream of one day buying a house and remodeling it. The dream is still on the horizon, and we keep chasing it down, hour by hour, day by day, year by year, until, one day...

But for now we settle for the dream, still deep within the romance of the  idea, as realistic as we are trying to be about it.

She goes off and does her thing; I get my coffee, and then get an urge and change the station. It's time. Reporters and politicians are screaming across tables at one another in elegant voices, lost in linguistic sword fighting. These are the people who perpetuate the status quo through their inability to come to any terms--but the people aren't that divided. We are just meek, or so we think.

She is kissing me on the cheek as I am lost, trapped in a cave, staring at the shadows. Then she is pulling out the driveway, and I realize a few minutes later that I am by myself.

Then it is over, and I get this urgent need to be productive so I clean. The dishes. The counters. The floors. The cat boxes... Before long the windows are letting in the insecure sunlight, and everything is glowing as the scene of my neighborhood fills my windows as I sit at my desk in my office, and I wonder how many around me have also won their Sundays. In this neighborhood, probably more than a few.

I realize that I don't stop enough and appreciate  my accomplishments, I am too caught up in the chase for more. I was swept away in the whirlwind and I have gotten too busy to notice that I am all of the sudden in technicolor. I need to catch my breath and slow the beating of my heart and stop the rush. I become awash in the softness of the daylight, and just take it all in... I let my breath out and become awaken to a  new state of mind... Seizing the day, I pull out my guitar.
Posted by Gabe Gott at 1:38 PM No comments:

"Going It Alone": Gaining the Necessary Toughness It Takes to Become a Professional Writer

While I do not get paid to write, or solely to do that, anyways, I do get paid to use my writing skills, which means, of course, that I have to keep them at a high level. It is worth the effort, though, just to be able to earn a living related to something I deeply enjoy.

I am currently making a living both as a writing teacher and a marketing generalist, but I am also, when I can be, working towards becoming a professional writer. Instead of getting another degree (I mean, Jesus, I already have an M.A. in Literature), I have chosen the trial by fire method: self-publishing.

When it comes down to it, I have a hard time letting go of control, and while I don't mind working for others--in fact, sometimes it can be downright enjoyable when you find the right job--I am adamant about pursuing a writing career over the long-term. Any time I am performing the task, thinking about the act or teaching it, I am working towards figuring out how to get paid for it. When I am successful in my marketing and copywriting career, I will have learned the required skills that I need to eventually become a successful writer, if I am willing to continue working towards it. Persistence, I believe, is the key: always figuring out how I can become better at the task, and always working towards the goal.

In order to be successful as a writer, you need to make it about your skill, and you need to understand that it's not just about what you produce with it, it's also how you make an effort to best reach those who you intend to reach, with whatever means necessary, and that means figuring out the most effective means of doing so. I believe it also helps if you enjoy the process, and are willing to accept the highs and lows and chalk it all up to experience.

It's all about, in the words of Will Ferrell as George W. Bush, "Strategery," and maintaining the necessary toughness that it takes to make it through the early stages. It also, I think, becomes about maintaining a connection with yourself: who you are and where you came from, because the thing that scares people the most is dishonesty, even though it seems like we are all dishonest with each other and ourselves all of the time.

That means that you just have to keeping loving writing, no matter what, because, when it comes down to it, it's all about the writing anyways. Does that mean that you shouldn't try to make a living doing it? No, but you do have to have an eye for long-term success and not expect it to happen overnight, and not wait around for it to happen, either. If you want things to happen, you have to make them happen if they are going to happen at all.
Posted by Gabe Gott at 2:23 PM No comments:

Making Progress on Your Novel is Hard, But You Have to Keep At It

My second novel, which shall for now remain nameless, is coming along, somewhat. Definitely slower than I had hoped. Definitely not doing the three-hundred words a day; although, I am making progress. It's hard to find the time. When I do, I try to make the most of it, though.

I don't think it is going to turn out as long as I had originally thought. I don't really think stretching it is the right approach, so it will just have to come out naturally and be what it is. That's how these things kind of take on lives of their own.

Of course, I am writing from an outline, but I am leaving a lot of room for the moment. For me, the outline is only the skeleton, and I have to flesh it out and make it a living and breathing organism. That can only come from a little bit of inspiration and a lot a bit of putting my fingers to the keyboard or my pen to the notebook and making progress.

When I think back about how I wrote the first one, I remember taking every free moment to work on it. At the time, I was living in Chicago and was constantly, every day, riding public transportation, mostly the Redline El traveling between Wrigleyville and downtown Chicago or vice versa.

For work, I got off at the State and Lake Station, which is right down the street from the Chicago Theatre; for home, I got off at Addison, which was literally Wrigley Field. With headphones buzzing, I spent equal amounts of time gawking out the window, people watching, and writing. The first draft took about six to eight months to finish in this fashion, after having spent like five years writing around thirty pages.

Then I spent a lot of time editing and rewriting it, and I would also do that while riding the trains. I paid to get it printed, so I had these giant, three-hundred-page stacks of 8.5 x 11 white paper with this world I created printed on it. I would read it and mark it up, writing in the margins; then I would go home at night and incorporate all of the changes to the file. I went through this process several times.

The second time isn't as romantic; although, I have matured quite a bit, and learned a lot, and hopefully it shows in the quality of my writing and my ideas.

Hopefully, one day, it will all pay off. Then again, maybe, in some ways, it already has... Sometimes, money isn't everything. I don't know if I can describe in concrete terms what writing does do for me, but it has to be as close of a thing to an orgasm or a religious experience as anything I have ever experienced.
Posted by Gabe Gott at 6:04 PM No comments:

Email ThisBlogThis!Share to TwitterShare to FacebookShare to Pinterest
Labels: Akron OH writer, Bed Head, cult following, Current Events, Escapes by Gabe Gott, indie author, out in the fringes, Out in the Garage third edition, Tales from the Fringes, underground fiction

Escapes, it shall be!

I am making it official: June 1st, 2015. That will be the magical date that it will appear for sale. 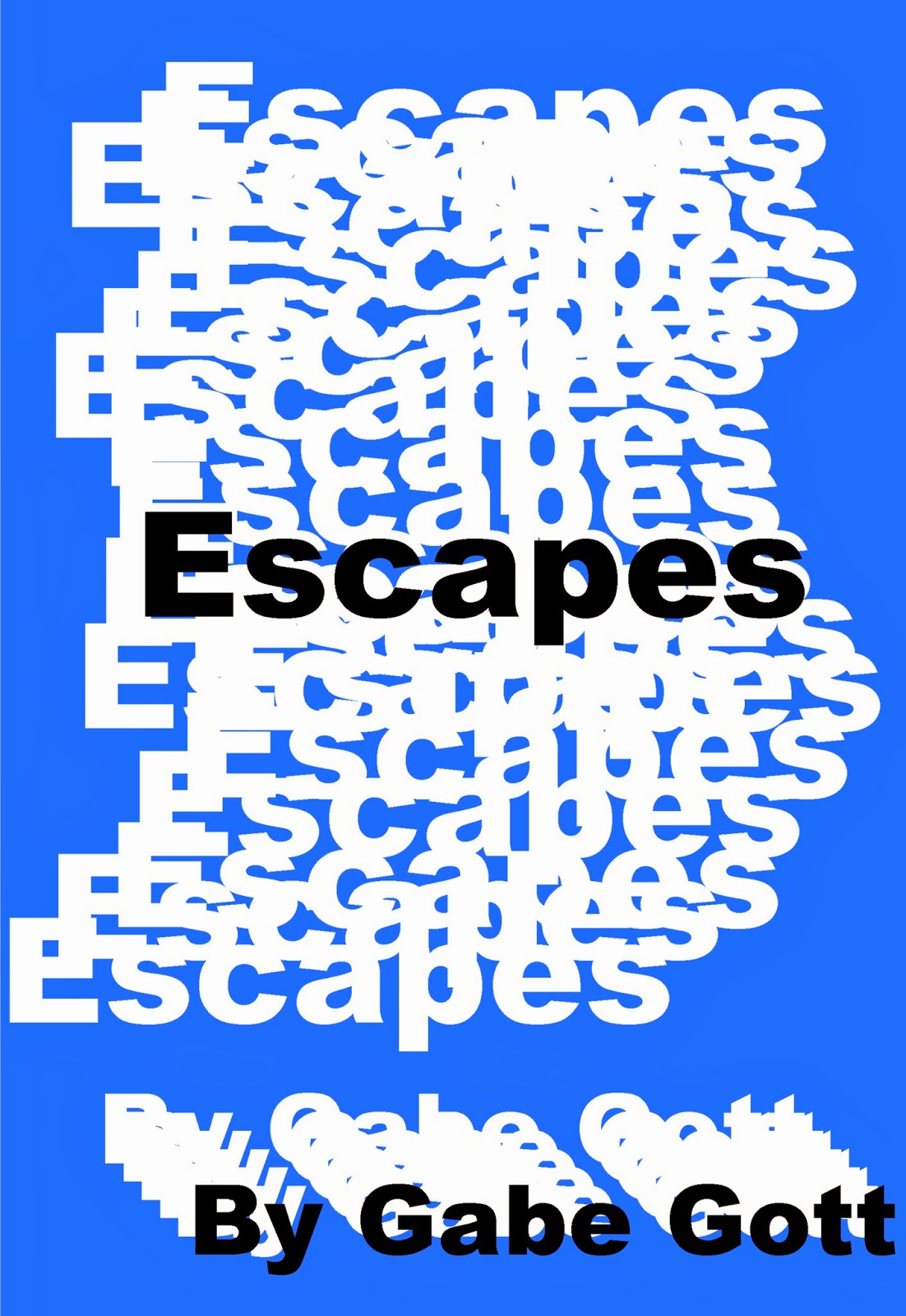 That will also be when the sales of the first edition end--so if that is the one you want to read, and you haven't bought it yet, you have until then to do so. If the final edition catches your fancy, you will be able to relieve those impulses soon.

The new novel is coming along slowly, and I am writing more short fiction, so things are looking on the up and up--at least as far as my hobby is concerned.

As far as my career, well... I am working on it. We'll see what happens. I just have to be diligent. I just have to keep applying. Keep up hope. Believe in myself. In spite of my lack of success right now, I am still confident that I will find the right job soon. You never know, it could happen tomorrow. I just have to keep trying to make it happen until it does happen.

I have some other announcements to make, but I am waiting for the appropriate time. I think you will be excited, especially if you like my short fiction. ;-)

A Story for a Story: NEW FLASH FICTION!

Very excited about a short short story that I wrote about Sasquatches, so I am going to share this different, previously unpublished one. The two stories are vastly different from one another, but the Sasquatch one you'll have to wait a few months to read, so enjoy this one instead:

The daylight unfolds around them huddling together, burrowing deeper into the sleeping bag, bundled in blankets—a giant cocoon in the middle of the campsite. Sleep still clings to their brains.

The fire burned down to coals long before, and those that remain glow with afterlife, sending off faint waves that warm their spirits more than anything. The cold pierces through like needles, sending shivers through their bodies, and they absorb into each other to fight them off.

Laying there, in a daze, sharing the same breath, the world pulsates to life around them as flashes of twilight patter against their brains. There is just enough of a clearing overhead, that when they look up, it is into a wishing well, and, for just an instant, they can see the future…

Birds chirping, the sun’s rays gaining potency, they linger as long as possible, shutting out pangs of real life, getting in touch with what is real.