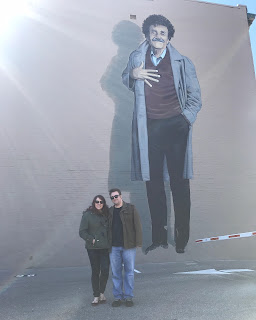 The longer it stretches between posts, the more it seems like a chore. Even though, when it comes down to it, it's really not. However, even if some posts are strung out between long stretches, I would just be shitting the bed in a major way if I gave it up after nine years. That's how you know I plan to keep this blog indefinitely for some time. It's pride related.

Actually, I've been blogging much longer, but nine years is how long I've maintained this particular website in some form, which existed even before I bought this domain name. When I first started it, I kept it up as just a plain-old Blogger website called Out in the Fringes. The original intent for this particular domain was to ramble about whatever was at the top of my head and also to publish my original fiction.

Since then, I have figured out better ways to publish my fiction and poetry, but on this website, I have spent all of these years honing my randomness, and it's as sharp as a bent thumb-tack against your ass through two layers of pants: you'll still feel it but it's more of a minor annoyance. Overall, I like to think of myself as a cross between Hunter S. Thompson and the more meta side of Kurt Vonnegut, with maybe a splash of F. Scott Fitzgerald, but I'm probably in reality just a poor man's Chuck Palahniuk from the Midwest, but way less cool.

For a while, I aspired to write more stream-of-consciousness, especially after reading Ulysses and Mrs. Dalloway, but I am far, far from that skill-wise so it's better that I stick with what I've already established. I do feel like reading these stream-of-consciousness texts has at least colored my writing in an interesting way, even if I don't dive into the deep ends of the style like I originally wanted.

On the less rigidly academic end of the spectrum of my influences, a friend from grad school introduced to me Harlan Ellison through "Repent, Harlequin! Said the Ticktockman." I was of course, familiar with him a little even though I didn't know it because of the original series Star Trek episode he wrote, "The City on the Edge of Forever," but "Repent, Harlequin! Said the Ticktockman" inspired me to buy the collection where it appeared, Paingod and Other Delusions, which I am nearly done reading. I definitely need to read more science fiction like this, which I would say exists in a similar universe as Vonnegut, but also Ray Bradbury, George Orwell and Phillip K. Dick, which all have also inspired me in some way.

This split between more "literary" and more "pop art" in my influences definitely explains why I don't stick to one genre or another or really even consider that when I go to write a story. The ideas just come and I just write them. There's no real grand plan, at least not to my knowledge. My styles are slowly merging, though.

That doesn't say as much about my current short story collection, Asshole Years, due out some time in 2019, as it does my next baby, Xennial, due out Election Day 2020. I am really excited for both, but Xennial will have all brand new stories, and they are all more in the style where I'm heading that the styles where I've been.

Speaking of which, I have been thinking about it recently, and I might eventually release the rest of the stories from my first collection, Tales from the Fringes--the ones that didn't end up in Asshole Years. A lot of what's left originally appeared in this blog. Not all did, but many of them, if not most, did. It has been almost exactly a year since I published something. My most recent book, my second poetry collection, Idiot Parade, came out on May 12th of last year. If I wanted to publish these remaining stories as a collection, I wouldn't really have to do much. It is, of course, possible that I have already planned for this and a completed manuscript already exists lol

Hmmm, maybe I'll consider it. I would be tempted to rename it, though. I don't know. It's definitely not my main priority right now. That is in getting Asshole Years finished. We'll see what happens, I guess.
Posted by Gabe Gott at 12:19 PM