A Existential Rant, Just in Time for the Holidays 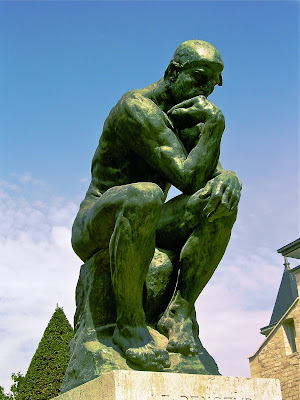 What is the point?


That is a question I find myself asking a lot lately, including but not necessarily limited to the big "what is the point?" topic, that is, life. I don't mean it in a "I hate myself and want to die" sort of way, though, it's more of a moral-existential-philosophical question: What is the point of my/our existence on this planet in this galaxy/universe/multiverse?

Of course, I am by far not the first person to ask this question, and it is not the first time in my life that I have asked it, either, but it seems more relevant than ever with the state of things in the world. I don't know if things are better or worse than they always have been, or if we are just more aware of what is going on, but it seems like everything is spinning out of control and at some point, probably sooner than later, we are all going to be flung off into the abyss.

Okay, so that did take a dark turn there for a moment, but I really don't mean it in an existential dread sort of way, it's more of an intellectual curiosity. Over the millennia, an almost endless number of schools of thought have developed on the subject, and I think we too often rely on something or someone else to define the narratives of our lives out of fear of the unknown. It's why so many people subscribe to particular sets of beliefs, even though when they are understood from a rational distance, they often times seem absurd and illogical.

Does that necessarily make them wrong? That, I can't answer definitively, but I would say that some of them have to be wrong, right? I mean, come on, Scientology... That is clearly made-up.

Honestly, I do think to a certain degree it is relative, at least in the way we understand what there is out there, but I also think that we don't give ourselves enough credit in some ways, but we also give ourselves way too much credit in others. For example, on one hand, we use technology primarily as a means to entertain ourselves or kill each other, and that too often we see ourselves as the very center of existence, for lack of any other explanation, and because some religions explicitly tell us that is the case.

I mean, most people know that we are not literally at the center of the universe, but at the same time believe us to be chosen as such by some deity, effectively making us what we know ourselves not to be, which is why we are so short-sighted with what we do with what we define as "progress."

With our capabilities, we could be striving much harder to explore what there is out there, and trying to more realistically define our place in the universe, but most people don't give a shit. Conditioned by the idea that a few popular religions tell us that we are the chosen ones, and if we follow a certain set of rules, we will live forever, the people who subscribe to this, when inundated with commercial promises that we deserve to have our desires fulfilled, become caught up with having the most and being the richest.

This is why Christmas has become such a big overblown materialistic clusterfuck instead of the religious holiday celebrating the birth of the only person in Christianity whose ideas ever actually made any sense what-so-ever, regardless of whether you believe that he was crucified and came back to life three days later, or not.

We are all almost definitely going to be flung off into the abyss sooner than later, because we continue to allow ourselves to be spun around and around and around again, because it's easier not to question the things that truly need to be questioned, and to let ourselves be trapped in certain systems that redefine freedom as being able to choose between a few carefully selected choices, just so the people who get to choose what we have to choose from can be even more better off than they were last year, and we can feel satisfied for five minutes or so, until we are inundated with ads for whatever After-Christmas holiday extravaganza, blasting across our telescreens.

So merry fucking Christmas, I hope you all get exactly what you deserve. I know I will, and that actually does help me sleep at night.
Posted by Gabe Gott at 12:59 PM

Email ThisBlogThis!Share to TwitterShare to FacebookShare to Pinterest
Labels: Akron OH writer, Christmas is a material holiday, existential ranting, indie author, laissez faire capitalism is the worse, Materialistic Excess, using religion as an excuse to be an asshole