It has become my habit to listen to two albums on Sunday mornings, Breakfast in America by Supertramp and Paranoid, of course, by Black Sabbath, among whatever else I am feeling at the moment. I am currently on the B Side of Paranoid, "Electric Funeral."

I'm not even sure where to start, to be honest.

I suppose, it would make sense to start with the biggest revelation and work my way down. Yeah, that sounds like a reasonable way to structure this. Go!

While things on a macro level are crazy and fucked up, in my own little bubble, transparent though it is, I have actually accomplished some shit.

On literally the last night I could register, I found myself filling out this online form for this thing. It seemed like a good way to spend $15.00 that I had no hope of ever seeing again, so with my wife's encouragement, and the encouragement of close friends and family, I applied for a fellowship with this new locally-based organization, dedicated to the arts.

And then the unthinkable happened.

Thank you Amy Mothersbaugh, Nancy Brennan, and Natalie Grieshammer as well as the Board of Directors. I am so excited to be part of such an amazing project.

I am working on some ideas, but the basic gist of what I plan on doing involves spending the first half of the month-long residency writing a new chapbook, and the second-half doing the art and design for it. I'm really fascinated by screen printing, so I might do something with that. My big event at the end will be a chapbook release party, hopefully with live music and lots of wine.

In the meantime, in addition to keeping writing plenty of new poems just because, I am also working on finishing some short stories because I have two short story collections in the works, Auto and Bastards, and I am also trying to finish the first draft of my second novel, The Ash People.

It's actually not as bad of a workload as it sounds.

Auto contains some of my best-known, previously published stories, including some from my out-of-print first book, "Greasy," "A Hipster Confession," and "The Opossums," one that has been self published as a single, "The Day the Music Died," and one that was published by a literary journal, "Truck Shop." For this new collection, I am writing two new stories, which is why it is delayed from my original goal publishing date. Anyways, it is my first priority and will be out soon, I just have to finish "Highly Evolved" and "Xennial," which like the rest are fairly personal first person narratives, fictional stories based on my life, hence Auto. These two stories really round out the collection well and make it feel complete. 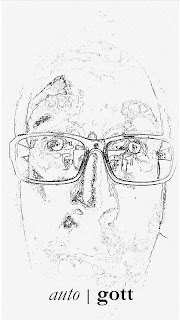 Bastards, for the most part will be new stories in the vein of dark humor/satire. The only old stories in it are "Starving, America" and "The Bananamen Prophecy," the rest are all brand new, with titles like "Snowflakes," "Bukake," and "The Balloon Man."

The Ash People is kind of a combination of the two styles that I write, realism and dark satire, which gives it an interesting texture that I think you, my readers, will enjoy a great deal.

Anyways, expect me to post more often. I am going to stay busy writing and making art, but I will try not to be so busy that I neglect this website, which I have kept going for a quite a while now. There might be lulls every now and again, but, at least for the foreseeable future, I will keep on keeping on with it.
Posted by Gabe Gott at 12:50 PM