Ramblin' Gamblin Man, or You Can't Keep This Elephant Caged 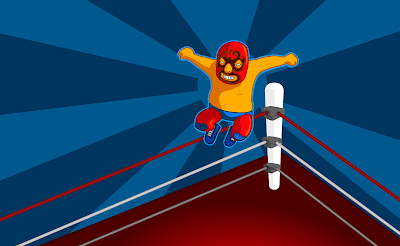 Today's ramblings are brought to you by Cage the Elephant's latest album, Tell Me I'm Pretty (not Bob Seger, sorry Bob). When I first saw these boys at Lollapalooza in 2009, I knew they had something great going. Two albums and an EP later, and they only continue to prove it.

Anyways, for those of you who are relatively new to reading my blog, I haven't written a post this rambling in a while. I apologize to those who are used to my more polished prose. Blame it on the cold medicine. To be honest, though, I am not really that sorry. This is more of a return to form for me, since I spent the first several years of this website's existence just rambling about whatever topic struck me at the moment, which is what I am feeling like doing today. If you don't like it, don't approve of it, I will give you a moment to find something else to do...

Alright, are we good? Everyone still here? I am counting heads, and I only seem to have lost a few, just as I thought. Most of you are pretty loyal, which I appreciate. Keep up the good work!

I think I have come to an answer regarding the dilemma that I outlined last Saturday about the novel that I have partially written (a first draft of). Namely, I am going to finish it. Huzzah! When it comes down to it, not finishing it is a cop out, and I know that it is good, I just needed to remind myself why I chose this particular story to tell in the first place. In short, I wanted to make an artistic statement, as well as make a social criticism, and the time is right for me to do it now. If I wait, I could miss my opportunity, and I don't want to do that.

Right about now you are probably thinking, "But Gabe, you have told us about this novel more than once, but you have not told us a goddamn thing about it!"

Hold up a second! That's actually not true that I haven't told you anything about it. I have in fact alluded to what it's about, possibly more than once. Without combing through several blogs, I remember specially telling you at some point over the past year or so that it takes place in Chicago in 2009 during the Great Recession.

Okay, so I see that some of you who were expecting me to ramble are starting to lose interest. I built it up but then started talking about my book, and, with the exception of these talks about my rambling, and the intro paragraph, it has been pretty focused on that. The problem is, I don't really know where to go from here. My mind is pretty focused on this topic right now.

I could talk about the election, but I am pretty burnt out on that, to be honest. I have followed politics pretty closely for all of my adult life, and I was even the precocious middle school journalist who, while not taking it too seriously, followed politics at that time. Hell, I even attended a Bob Dole rally with my 8th grade newspaper staff, which basically meant standing in line for a really long time outside of Ashland University, which I spent most of entertaining (or annoying) those around me with my Ross Perot impression, which I basically stole from Dana Carvey: "Would you please just let me finish, Larry..."

What's going on this time around, though, what a shit show. Seriously. Just a real big fucking steaming pile of shit. And, if you thought it was going to end on Election Day, just wait. The candidate who I dare not speak his name is probably going to draw this out for a while, that motherfucker.

It's not like I am particularly excited about the other candidate, either. It's like choosing which rabid animal I want to rip my face off. What a fucking time to be alive! No matter what happens, I am still probably going to be poor and just smart enough to know that I don't have to be poor, but just dumb enough to lack the means of actually pulling myself out of poverty.

This election has made me feel almost completely disenfranchised. While I technically have the right to vote, and will still exercise it, I kind of want to give it back and go vote somewhere else. I hear Northern Europe is nice this time of year. I don't know Swedish, but I could learn. I mean, I have followed Ikea instructions, so how hard could it be, and Finland's education system has it's appeals...

That brings up a question, though: does a legal entity have to take away your right to vote (or prevent it) in order to disenfranchise you, or can they do it merely by setting a system that is so convoluted, that it doesn't actually matter how you vote?

Certainly there is a big difference in the candidates' polices (or lack thereof), so I am not suggesting there wouldn't be differences between a presidency of one or the other, but what I am suggesting is it doesn't matter whichever one gets elected, because there won't be much either one will actually do or change to make a significant impact on my life, realistically. I mean, look at all of the stuff President Obama tried to do for the greater good, that only turned out to be half measures or symbolic gestures, at best.

I am not suggesting he didn't ultimately make a difference in some peoples lives--although, to be honest, the biggest of those changes happened through the court system--but things he actually did initiate, or attempt to initiate, like healthcare reform and immigration, are even bigger issues, now, than they were before him. And it's not like he didn't try to make a difference, but when the system is set up to largely benefit those who already have everything, then it is their policies that are going to hold, in the end, rather than ones that are intended to make the system more fair for everyone. Oligarchy, anyone?

The only way any changes will happen that will have a lasting impact is through actually changing the constitution and leveling the playing field, and that doesn't seem likely to happen anytime soon. I feel like it would be healthy for our country if the states decided to hold constitutional conventions and passed a measure that would make a real difference, but are we even capable of that, as a country,  as a people?

Seriously, though, Northern Europe, I can handle your winters if you can handle my American loutishness. Once I chill out and calm the fuck down, it should go away in a relatively short order. We can make it work. Think on it...

Okay, so maybe my ramblings are more focused now, but I guess that could be a sign of my overall growth as a writer, rather than as a weakness. I don't want to end this on a political rant, though, but I do want to go to Taco Bell, so I need to decide on something more satisfying pretty quickly.

I guess I could bring it around full circle. Doesn't that sound nice? I think so. I think that's what I am going to go with.

This Cage the Elephant album is pretty fucking great. I have listened to it twice now while writing this, and I can honestly say that I might listen to it again. "Mess Around" is catchy as hell, as well as "Trouble," but really it's just a solid fucking album all the way through. If you like rock n' roll, it's fucking worth the ten bucks. Seriously.

I did this with Melophobia, too. That album blew me away. That transition in "Spiderhead" is fucking phenomenal, and "Cigarette Daydreams" gets stuck in your head, in a good way. Hell, maybe I will listen to Melophobia instead, now that I think about it.

There, that should get the bad taste out of your mouth from the discussion which I shall not mention the topic of that came just prior.

Speaking of tastes, Taco Bell beckons. I guess I should probably take a shower, too. 'Toodles!
Posted by Gabe Gott at 12:36 PM